As we sit in the van in the Dolomites, with lightning flashing followed by booming thunder and hammering hailstones on the tin roof we drag ourselves to the laptop to finally have a go at writing about the Arizona trip.   As many of our journeys start from seeing something on the internet such as a blog, a video ....... then it will be no surprise to hear the Arizona trail journey began in the same way!

Just like the Highland 550  we would like to keep it short and sweet so here is another go at an acrostic poem (ish) on the Arizona Trail.


A welcoming ride from friendly Sunspoke (Sierra Vista bikeshop) landed us at the Mexican border half an hour before the start, nerves and sweat trickled from our bodies as we embraced the journey that lay ahead.

Rollercoasting relentless singletrack flowed through the Canelo hills, Fi slumbered in a shaded ditch with a bar hovering upon her lips thinking, "Is this possible, 30 miles in and I'm feeling kaputt!" Rest, cool down, slowly, slowly will get us to Patagonia for refreshing bitter cold lemonade.

In the night boom, boom, woken by gunshots, is this a dream?  Riding as dawn broke led us past a party still booming from the night! Silently sneaking through the Kentucky campsite littered with bodies and bikes, we carried on towards Tucson for a real surprise, a bar not on the map gave us an extra meal which was a delight!

Zipping along on day 3 up, down, up, down, watch the cactus, watch the rocks, watch the snake, we finally approached the road to Mt Lemmon to a cheery applaud and a refreshing surprise.  Legs turned as we pushed on to Summerhaven, another surprise Jenny followed by water! Yes the spigot fairy had flicked it's magic wand!  Onwards and upwards we rode into town for FUDGE and CHIPS or CRISPS!

Oracle Ridge, what can we say, a fantastic descent anytime of the day (especially in the dark). Sleep hung upon our eyelids we slept below Apachy Peak.  No, no lets not bother going into Oracle we will soon make it to the next pitstop.  Oh what a mistake for Fi as her food disappeared left with hunger pains and listening to Paul secretly munching in his tent.  (Mistaking chips as crisps - don't do it.)

Nearly at the end for the 300ers a delightful descent down to Kelvin brought smiles to our faces. Yes this is what we came for singletrack, endless singletrack.  Undulating next to the Gila river, a few hours sleep, time to get up and follow the lights upwards and upwards the end was in sight. Hours past as we climbed in the intense heat, revitalised by the downhill into Picketpost and a deservedly earned bottle of  warm water.

Arriving at Queen Valley ready to eat a horse only to find the only place in town closed for the season!  Thank goodness for the service station, sat with Jenny we devoured a horse with tummies full we plodded on to more food in Apachy Junction in the form of  'Jack In the Box'  yum, yum.    As midnight approached we found a patch of flat ground on the outskirts of town zzzzzzzzzz.

Track and road brought us to Roosevelt, miles flew by, a mop of the brow, is that lights ahead of us? A restful night in Payson, a restock in Wallmark then on to Pine for a burger or two before the Mongollon Rim enticed our push a bike skills.  Separated for a while as dark crept in, Paul heard a noise, thought it was Fi but no a bear in the trees.  Eventually reunited at the mouse hut, a squeak, a nibble, a pitter patter of many feet, not much difference to the Travellers Rest!

Riding along decision to be made, to snow detour or not is the question to be.  A race we did not come to do but a journey through this place, brought us to the decision embrace, embrace.  We arrived in Flagstaff to Mackey- D's.  "Supersize me" is what we said please. They replied, "We don't do supersize." Fi's jaw hit the floor a Big Mac Meal followed by chicken nuggets will have to do.   Full for a bit, we carried onto the Snowbowl detour, maybe we should have taken this one!  Hour after hour, tree over tree, more snow than we've seen in Scotland this year we came to the end. Yippee don't listen to Paul, I am definitely taking the detour at the North Rim.

An early morning surprise in the form of a mountain lion for Paul's eyes only, gave us a boost to push on and on and on through the heat of the day to a swarm of tourists in the Canyon Village. Refuelled by pizza, more pizza and more pizza we found a quiet place to rest as the nerves raced in preparation for .....

In and out as quickly as that, it was done the Grand Canyon thank goodness for that.  (If only!)  At the top we learnt how to strap on our bikes, inspired by the views we plodded down to Phantom lodge for a deserved rest before Paul raced on reaching the top to a familiar, friendly face and a place for a well earned rest.  Fi slowly, slowly reached Angel campsite to be told, "Watch out for the drops, the scramble and you'll have to walk sideways at a narrow point!"  Nighttime awoke, nerves rose up and were spitted out as she met a corner and a traverse, "It can't be along there!"  A flick of the head, oh silly me there's the footpath; no scramble came or narrow ledge, at last she made it to the top of the Rim.

Lie-in would have been good but onwards to Jacobs Lake for a leisurely break.  How funny for the Brits who had come from the UK to end up together so close to the end!  "Oh it's like a day ride from here."  Laughs, falls and phenomenal singletrack  brought us to the red, rock of Utah for the final descent to the finish full of memories we'll never forget.  Thank you Arizona, it crossed all our minds if only we could carry on through Utah and on and on......  Not this time but maybe soon; cheese, biscuits and wine a real treat left by a fellow rider then a lift by a passing angel Misha brought us to the flashing lights and the end of a journey goodbye, goodbye.

NB  Angels appeared along the way, cheers amazing American angels who gave us support in many ways. 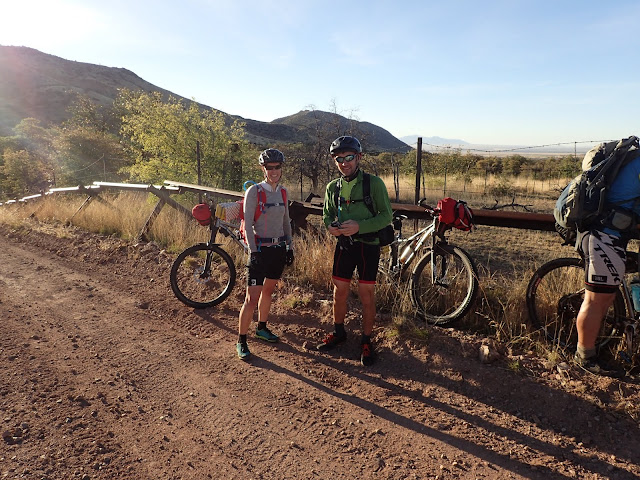 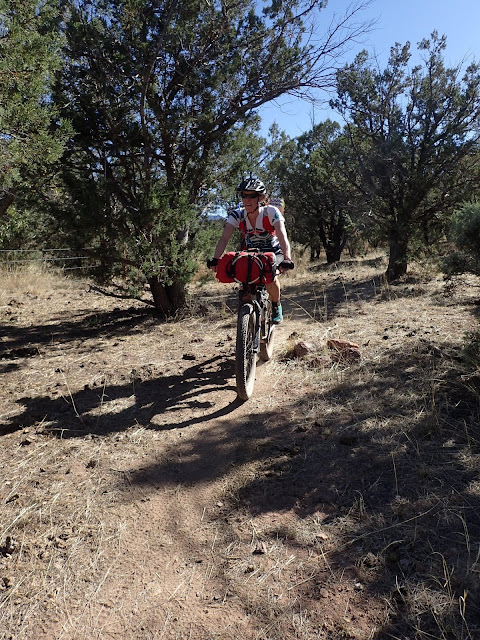 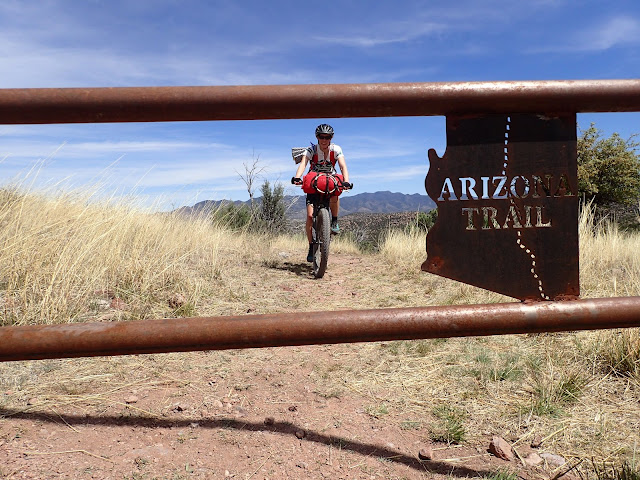 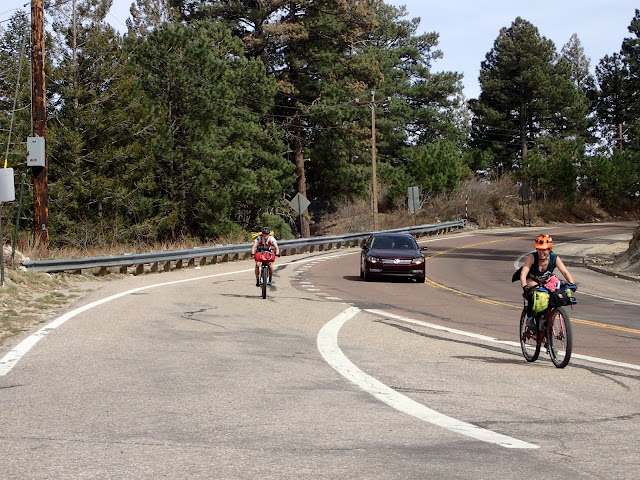 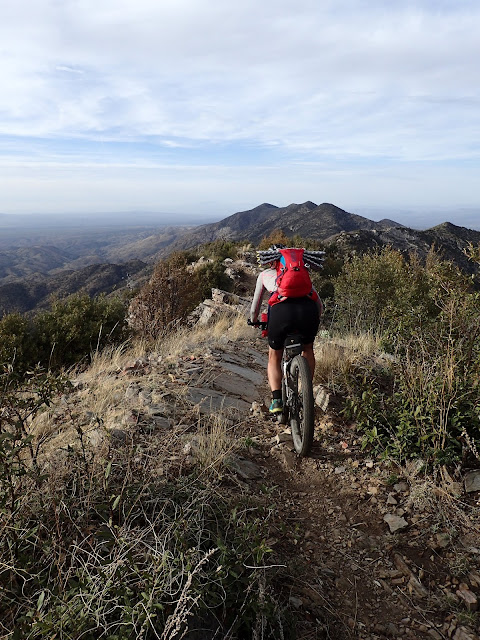 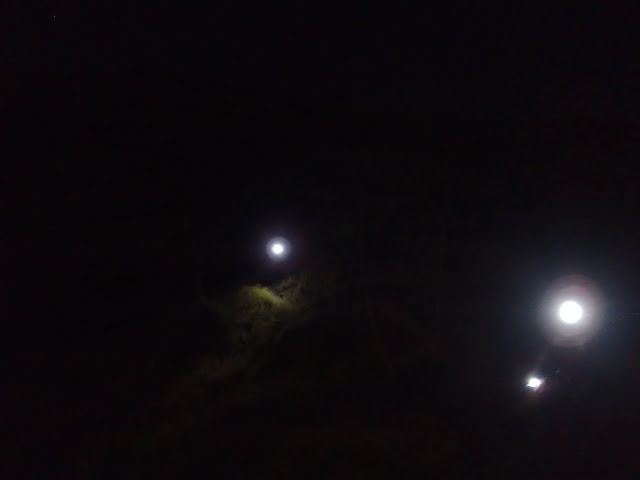 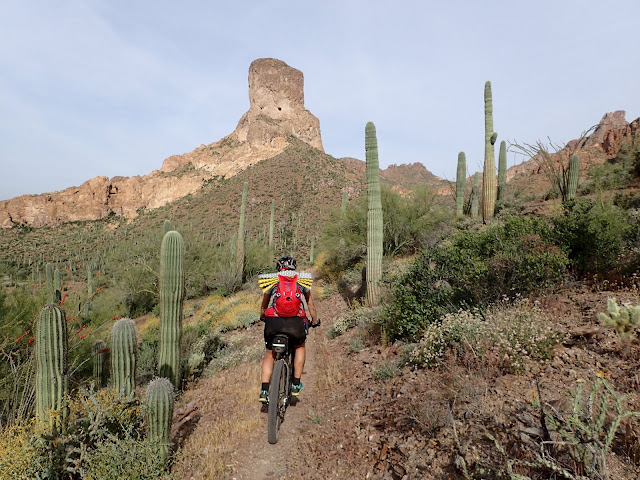 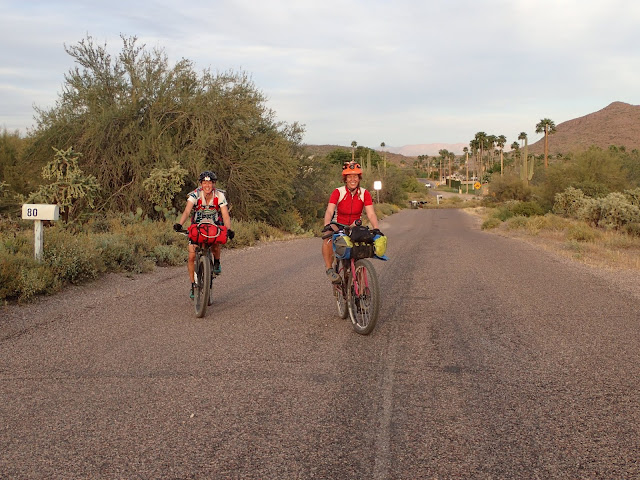 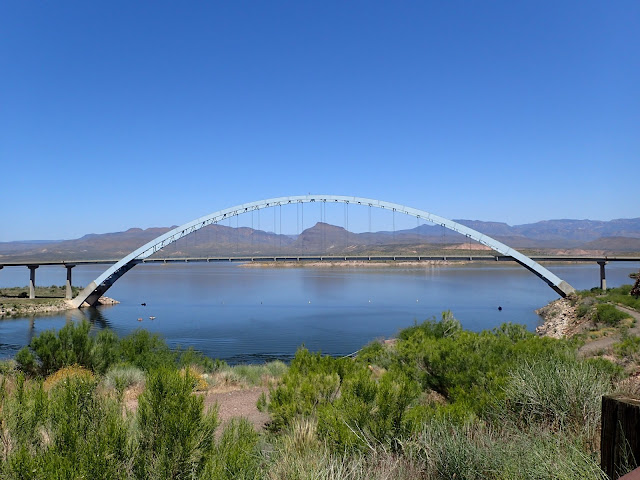 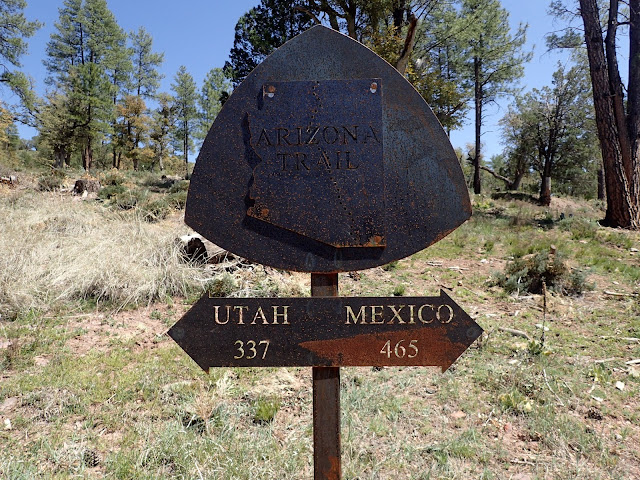 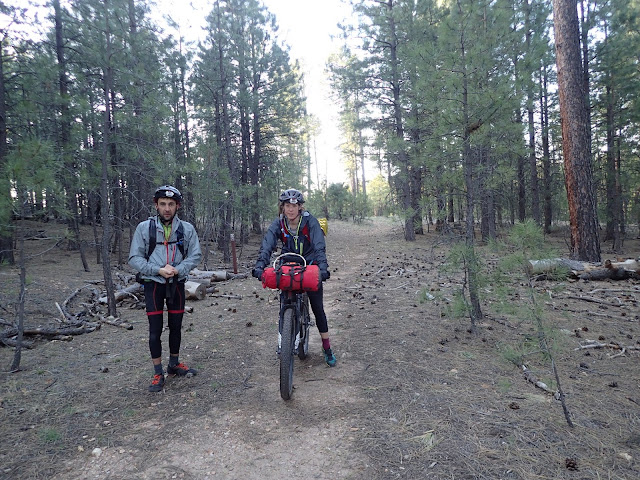 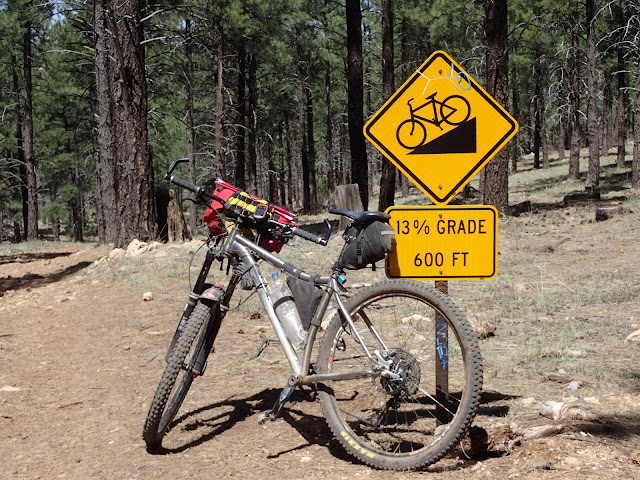 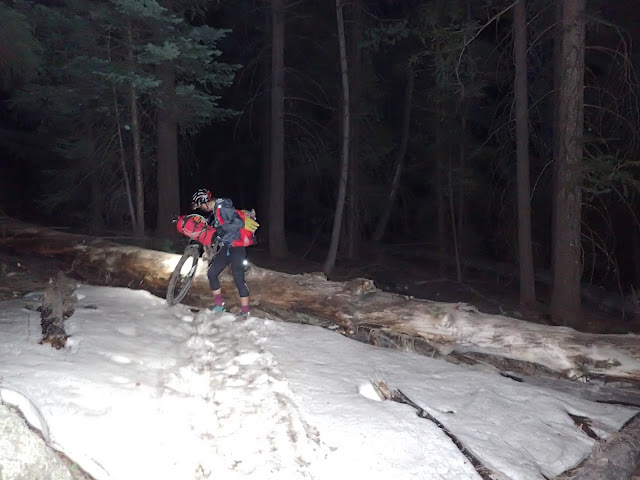 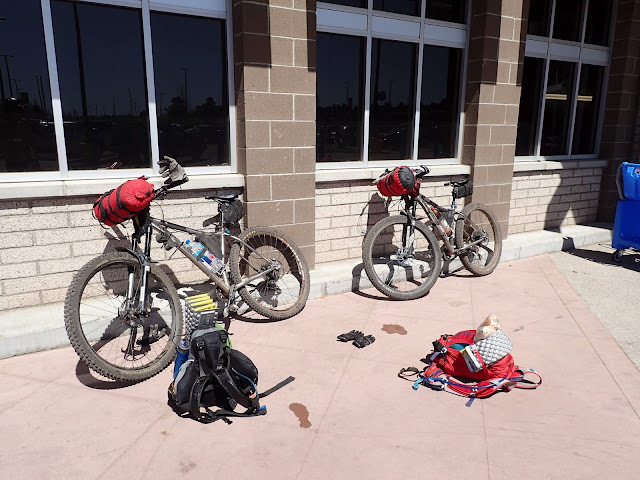 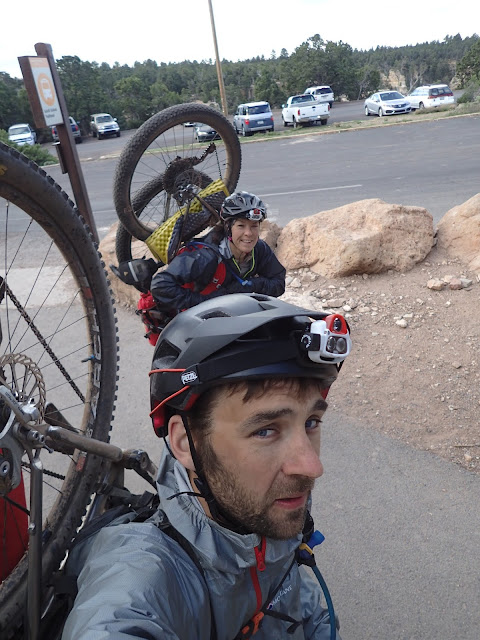 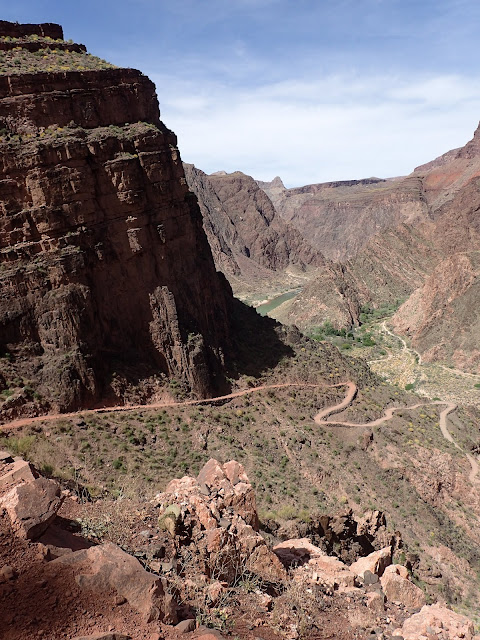 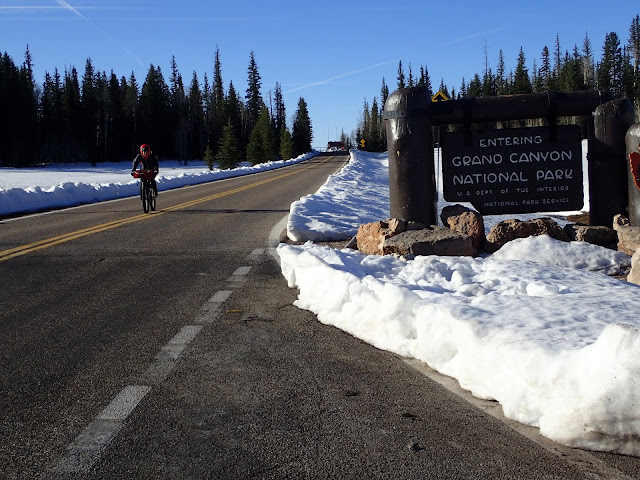 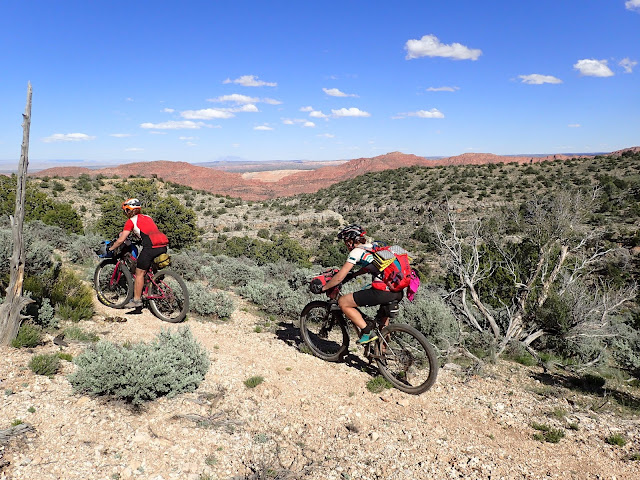 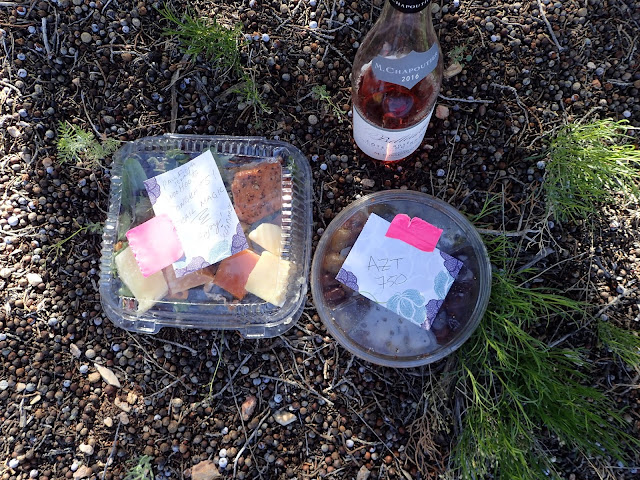 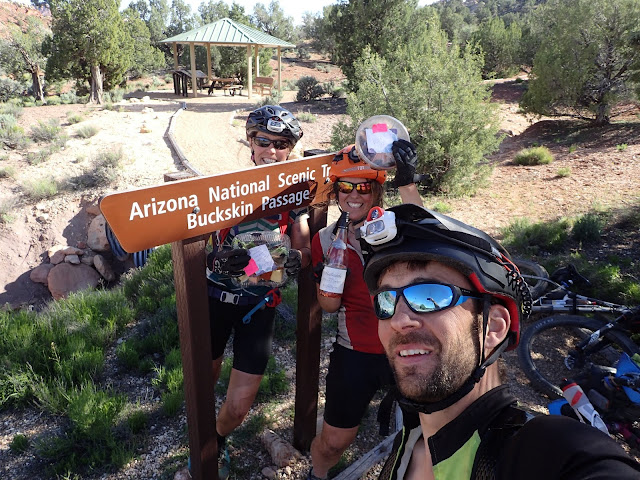